The August curse…basically too few reports to cobble together a report, but I figured the news was good enough from those that did that it would be a shame not to share it.

In some of the weirder news of the season, if not ever, a guy managed to catch a white marlin in the Cape Cod Canal the other day.  From onthewater.com

In other news, if you’re not watching the RT homepage, you’re missing out.  We’ve got Rip Cunningham, Capt. John McMurray and Steve Waters covering fisheries conservation and updating every other day.  We also had a great article from Michael Behot on Saltwater Fly Fishing Basics this week, so be sure to check it out.

At Surfland their still seeing decent striper action in the River…be sure to check out their site for more!

A quick report from Kay about this morning: Jimmy and Sean were out front from about 3am on and got a few fish but the ocean is a bit rough today. Had another fisherman in showing us soe pictures of a cigarette boat that is on the beach. he said he would send them in so we can post. This was on the Oceanside of the jetties. Hopefully we get the story sometime. He was told by a few fishermen that he had just missed getting bluefish.

Also forgot about an email & picture I got Saturday :

Hey Liz, got this 30 incher this am, about 2hrs past high tide on worms! Paul Szostak of Chester NH!!!! Hopefully you have worms in the am!!!!! 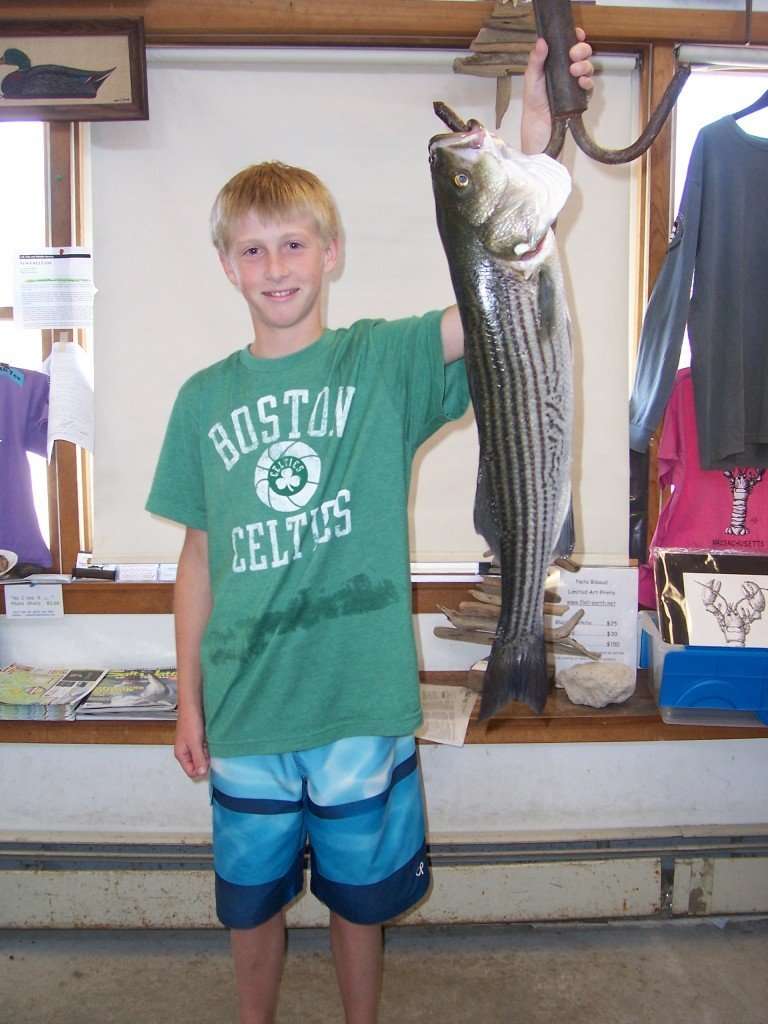 Today we saw a few fish in the store. These fish came from the southern end of the island, basically Sandy Point. First we have Jessup Goldberg Cook from Northhampton, MA who caught this 7 pounder. He was fishing the oceanfront using clams during the top of the incoming tide. He was very excited, but I can say not as excited as the rest of his party! Shout out to the girls!!! Anyways, Jessup was fortunate to have next to him a couple fishing that helped him out by giving him some clams to use as bait since that was what they were doing well on. Love it when you fishermen and fisherwomen assist the kids and help them learn! No sooner did Jeesup get the clams out he was reeling in this nice little keeper. Hope it tastes good!

And speaking of the couple that helped a kid fish, here are Karen & Michael Lachance from Athol MA with there catch of the day. They are camping at Rusnik Campgrounds in Salisbury and decided to head to the southern end also and were rewarded with Karen’s 15 pounder and Michael’s 11-12 pounder. Nice Karen….caught the bigger fish! So, the fish are starting to feed again,. Great news! The water also has cooled a bit so let’s get fishing again! 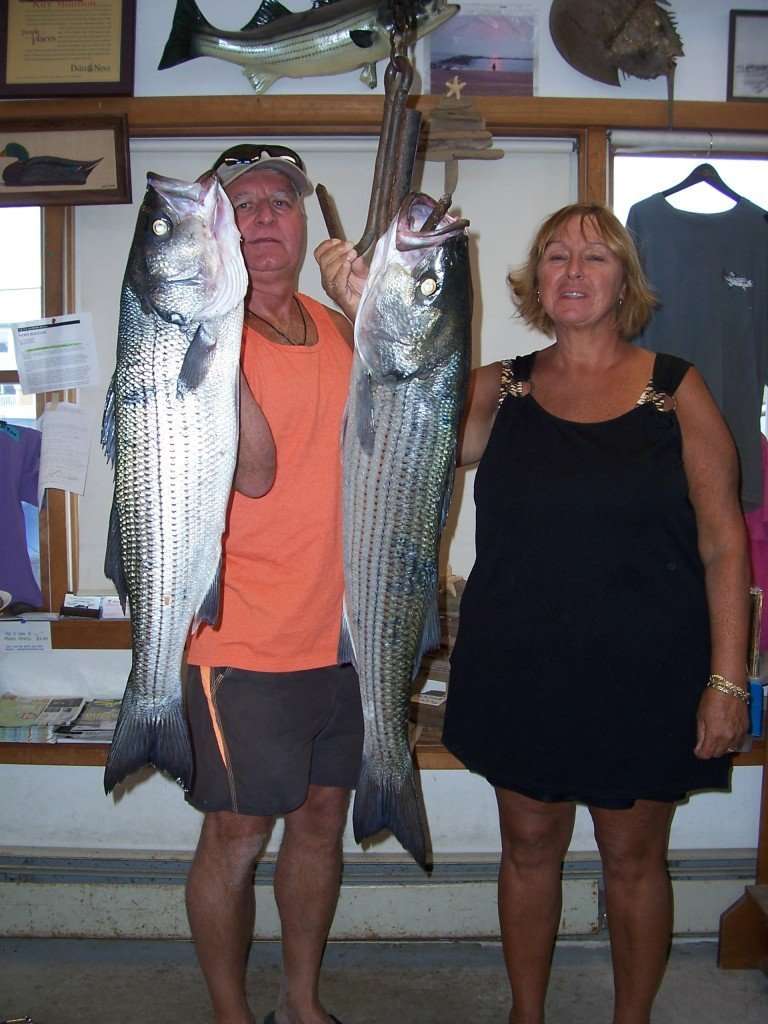 And continuing with the southern end of the island, yesterday on the 3rd we had Mike Petrowski from Tewksbury that caught this 16 pounder on clams! Please, guys on the refuge………..open up more of the southern end! such a great place to fish this time of year. Pretty please?????????? 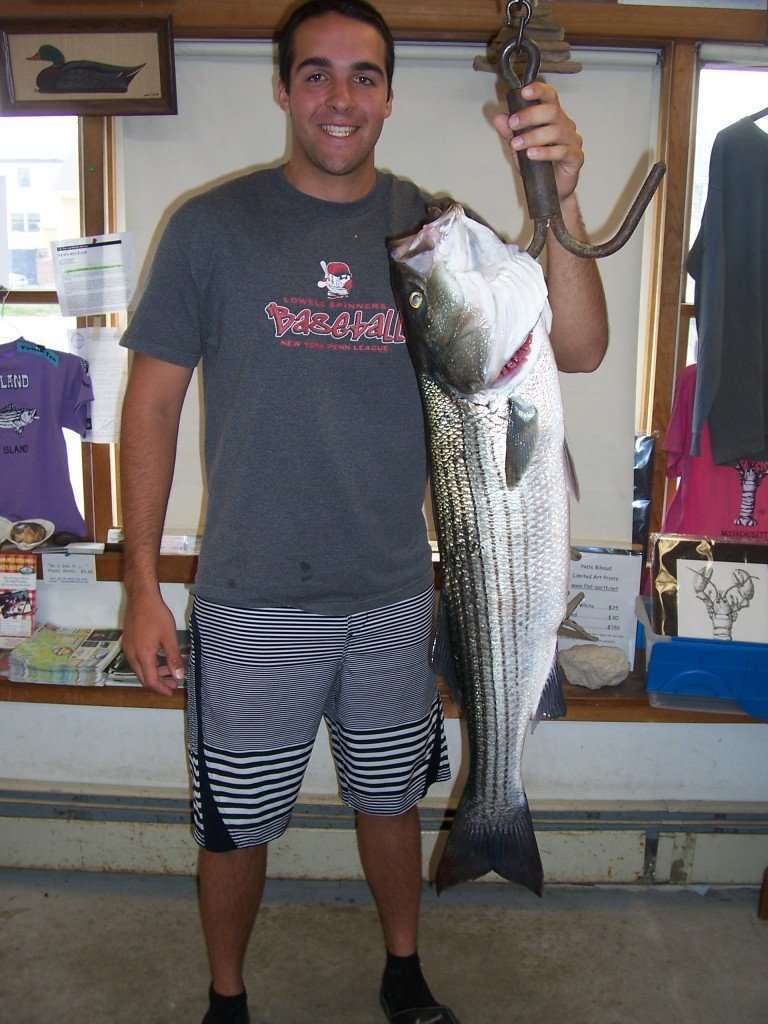 Want to also share some news of Joppa and the Merrimac River. The kayakers are starting to have some luck out there. On the 31st we weighed in a 14-4 pounder caught by Jeff Morrison from Kingston NH. He was using the good olde tube-n-worms in Joppa. As you see from the previous post, there a some nice fish in the mouth also along with bluefish. Thanks to the people leaving comments and telling us how they are doing. It helps since we haven’t seen much action out front this month to know that there are some having a pretty good time with the stripers!!!

Capt. Dave Bitters has had another busy week.  Check out this report then go to his site to read several others from this week…