The big news this week, other than the heat, is that the Plum Island Refuge opens for night fishing TONIGHT!  Via our friends at Surfland Bait and Tackle: 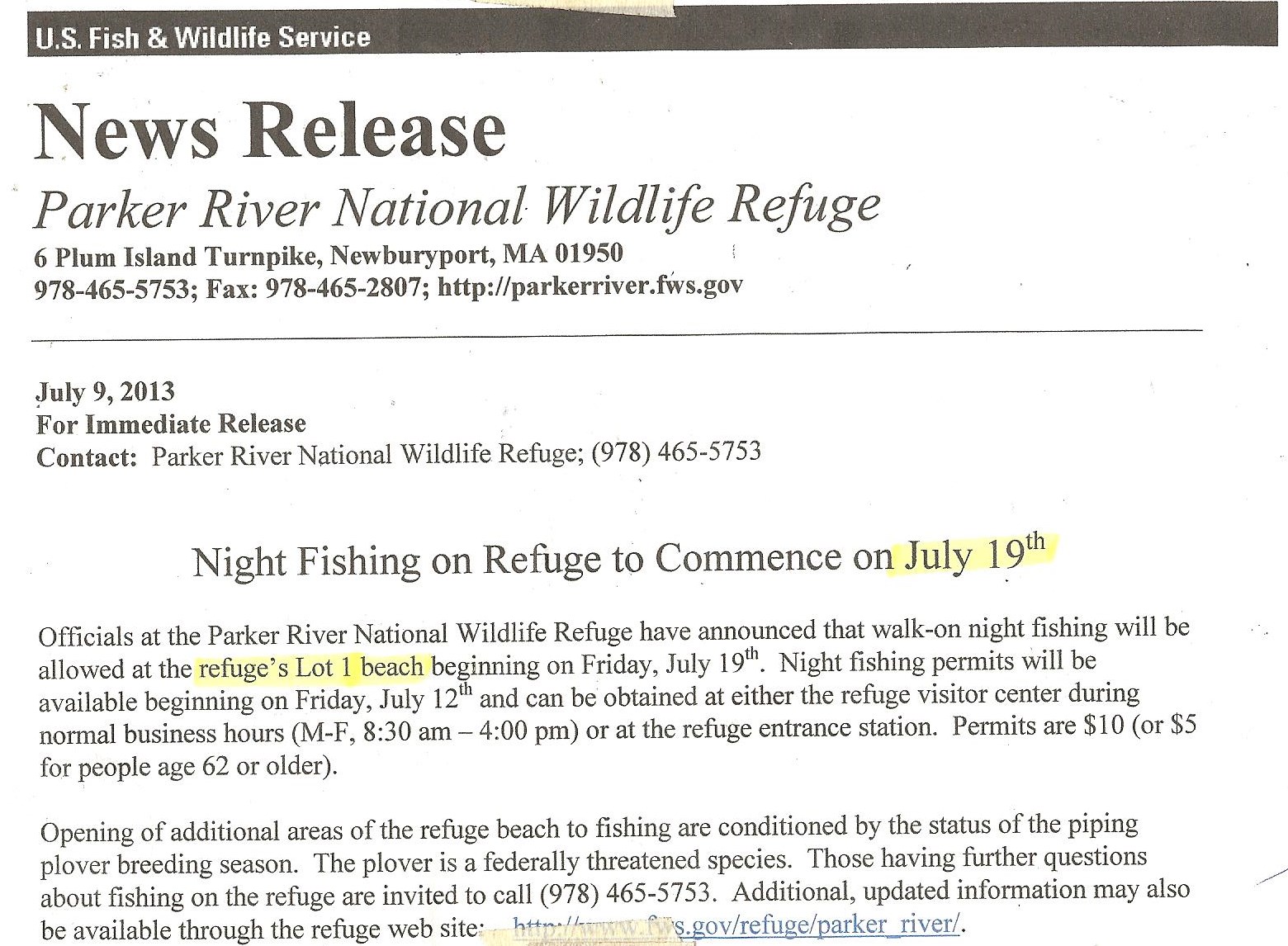 At Surfland Bait and Tackle they report:

Well finally some news. Tom Barnes (former employee of SBT) just came back from the beach. Little Bass were blitzing the beach!!! He went down for the incoming tide, but also because it is when he could go. He had a blast he said. He used little metal lures like Charlie Graves, Hopkins, Deadly Dicks, etc. Anything that looks like a little sand eel. He said the biggest he caught was about 24 inches. Off to work happy!

Well what have got to tell you? Very little. I can tell you that Mugsy, Ed and Tommy Kelly went out in the boat Sunday night. They headed out at sunset to fish the mouth of the river. They drifted tinker macks and caught one fish that was 31?. Hooked another but lost that one. They marked a lot of fish both in the mouth and out front along the outside of the sand bar. But, they are just hanging, chilling, trying to stay cool in the warm water. We’ve had other days when guys in the mouth had had a fantastic day from their boats. For you boat guys, catching the outgoing tide in the Merrimac mouth is your best bet.

Ed and Andy Kelly also hit the beach earlier in the afternoon on Sunday(before the boat) and Ed says that they saw a lot of fish busting out beyond their reach. Bluefish???

We had a few guys in this weekend that reported catching small bass at low tide in the mouth of the Merrimac.

John Liss in today. He fished last night on the oceanfront, he caught nothing but another fisherman using bait had two keepers by his side.

So again, it is slow, but there are lots of fish around, they are just picky!

At Tomo’s Tackle – but they got a new mascot this week:

Tomo Shiraishi has Tomo Tackle’s report for the week:

Striper fishing in north shore are has slowed up a bit.  There has been schoolie and small legal size striper blitzing in the sound, though, with some feeds lasting for hours.   Those surface feeding fish has been finicky at times.  Quietly approaching to the feeding fish and using small baits seems to have been the key to hook those fish.  There has been abundance of bait, including peanut bunker.  Black seabass are being caught at Middle Ground area by using jigs with strips of squid.  Squid fishing has been good overall in north shore harbors from Nahant to Gloucester.  The size of squid are mostly small, but there are some respectable size in the mix.  A few angler had great outings, catching 3 digit, on Yamashita jigs.  Orange has been the hot color for early morning and evening.

Shark fishing was off the chain today. Doubles and triples of nice blues coming in high and motivated. 7 on the rod, 5 on the handline, a few got hand fed. Super fun trip. More content, videos, catch phrases, and ice creams for the children when I get back on the beach.

Slappy reports from the Haba:

the haba bite has definitely slowed.

I got out last night to toss some Hogys. Water was between 68-72 pretty toasty for the harbor.

Started off with a dink on the 13″ hogy and kept looking. I was wondering if that was going to be it…I moved back to a spot that I had already cast at a few times already and nailed a nice fat 34″ fish. One more just a bit smaller, then it was time to head in.

We need some wind to mix the warm surface water in!

There’s still blues in the harbor (and, of course, a few tasty crustaceans…) as Riian Wykes demonstrates:

Back at it this morning for largemouth bass on the fly rod. Today, we fished a private pond stocked with trout. We had hoped to pick up a few, but the hot, hot weather and shallow warmwater pond is not a good combination for trout. Best trout fishing this time of year is cold, running or deep water. So, we changed it up and fished for largemouth bass.

All the fish we found were very tight to shore in the brush. We fished a yellow and black deer hair popper on a floating line and popped it just outside the brushline. The fish would come out of the brush and slam the popper.

There were a lot of forage fish for the bass and we did get a lot of hookups on pumkinseed and bluegill. Just beautiful little fish, especially the pumpkinseed with their bright orange bellies.

So, if you are not having any luck in the salt, or are looking for a change of pace, get the canoe or rowboat and head for the freshwater ponds with the fly rod and a handful of deer hair poppers. Just remember to fish the edge of the brush.

Capt. Dave shot over this report this afternoon:

5 Stripers on the Fly

On board today I had new client, John Daly, of Vermont, for fly fishing striped bass.

At first light, we found a school of top-water stripers right outside the harbor. Not bad for July! My gut feeling, based on 18 seasons of guiding on the bay, was we would catch about six stripers today, considering the time of year, intense hot weather, and VERY warm water temps all over the bay.  We were not too far  off that mark.

After landing five fish at sunrise, we began to work the bay. Saquish Rip held a few fish and we had a keepah come up and take one of John’s giant foot-long patterns he fishes for musky. However, that fish spit the fly.

From there, we ran to Whites Flat and worked much of the area with no luck. Then on to Rocky Nook, with no fish found. We decided to run to Gurnet and fish the rocks and weed beds. We saw only one fish and it was another keeper, but it was not interested in eating. Then, we hit Plum Hills, the South side and backside of Clarks.

We ended our morning with five fish total to 25.5 inches all on the fly. Slow fishing, typical fishing for mid-July, but a lovely morning on the bay showing a new client what this area has to offer.

Tight Lines & Good Luck out there!